Catch up with all the latest Phuket radio News

Phuket radio 91.5 FM delivers a winner!!! It’s nearly the time of goodwill to all men mice and anyone else that happens to come along and Phuket radio station 91.5 FM are already getting geared up as they “launch” excuse the pun a startling one week competition where 12 people, can win a Sunset cruise … END_OF_DOCUMENT_TOKEN_TO_BE_REPLACED

Phuket Island gets a Abba treat

All over Phuket island Friday and Saturday 8th and 9th Novemebr witnessed something that Phuket hasn’t seen for sometime as over 600 people each night packed the Lattitude tent at Laguna Phuket to witness the UK tribute band Abba Forever. Sensational and incredable value doesn’t describe it as Phuket converged on Laguna Resorts for what … END_OF_DOCUMENT_TOKEN_TO_BE_REPLACED

Phuket Property. PRESTIGIOUS ASIA PACIFIC AND GLOBAL PROPERTY Award win. The OPP (Overseas Property Professional) Awards for Excellence 2012 for the real estate industry, now in the 5th year, held their Annual Presentation Award Ceremony in the City in London last night (11/10/12). The awards were judged by a 50 strong panel of industry leaders … END_OF_DOCUMENT_TOKEN_TO_BE_REPLACED

Phuket Long Distance Triathlon Series to debut in May 2013

Phuket Thailand gets ITU Triathlon. Governor of Phuket brings premier LD World Triathlon Series to Phuket Thailand in 2013 attracting Athletes from around the world to the Island and showcasing through International TV broadcasts in more than 120 countries worldwide PHUKET, Thailand – Hot on the heels of the London 2012 Olympics, the Governor of … END_OF_DOCUMENT_TOKEN_TO_BE_REPLACED

Phuket News Saturday 4th August 2012. Kathu the village in the centre of Phuket Island rolled out it’s annual Street Culture Parade today the start of three days of of fun and entertainging Thai cultural events. Please take the time to look at the gallery of fun and colourful pictures. 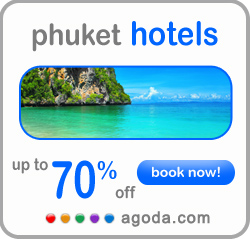